From Kim to Chris and Andrew to Van Drew, the redistricting of Ocean County has created a safer district for Ocean County's Democratic star, Congressman Kim, by routing his district away from the deeply red county. As a result, Congresspeople Chris Smith and Jeff Van Drew picked up several towns that once belonged in Kim's NJ-03 district.

Each State Constitution provides a framework for redistricting the Congressional District maps.  In many states, the lines are drawn in a partisan manner by the majority party in the state legislature. In New Jersey, redistricting is bipartisan. A 13-member redistricting committee is responsible for establishing districts. The commission is composed of six Democratic members, six Republican members, and a 13th, nonpartisan member who is chosen jointly by the Democrat and Republican delegations to the commission. The commission must adopt a congressional map via simple majority of seven members by Tuesday, January 18th, 2022, the latest. However, the 2021 redistricting commission approved their map on Wednesday, December 22nd with the nonpartisan chairman’s tie breaking vote approving the plan proposed by the Democratic delegation.

In a meeting on December 22nd, the commission approved the Democratic Caucus’ redistricting proposal. Under the map adopted by the NJ Congressional Redistricting Commission, the NJ congressional delegation could swing from 10 Democrats and 2 Republicans to 9 Democrats and 3 Republicans. Democrats on the commission cut out Democratic portions of Tom Malinowski’s Congressional District 07 to benefit three previously vulnerable democratic incumbents. In contrast to the Congressional Districts of 2012-2021, which were drawn by Republicans, the new Democratic plan more accurately depicts regional political divisions because representatives of both parties have a larger base to draw from within their district. This is most accurately depicted by the changes to NJ-03, NJ-02, and NJ-04, currently helmed by Representatives Andy Kim, Jeff Van Drew, and Chris Smith respectively.

According to the new map, Rep. Andy Kim (D-NJ-03) will see his 3rd District shed the deeply red Ocean County in favor of the more Democratic areas of Hamilton and northern Monmouth County. Both of these areas were previously districted in Rep. Chris Smith’s 4th Congressional District (NJ-04). Democrats in Ocean County will now confront the conservative Chris Smith and duplicitous former Democrat Jeff Van Drew in the upcoming 2022 mid-term election without Rep. Kim, who will have a greater chance of reelection with the new map. In Kim’s absence, the Republicans could split the spoils of Ocean County if they win reelection in 2022.

Identified in the map are the changes to know about Ocean County’s Congressional Districts. The best way to visualize the shifting in congressional power in Ocean county is to visualize how Chris Smith and Jeff Van Drew’s districts expanded into Ocean County. The graph mainly identifies changes to Rep. Kim’s districts. Outlined in blue are the regions that Andy Kim gained. Outlined in red are the regions that are now under the purview of Rep. Chris Smith. Outlined in yellow are districts that switched from Rep. Kim to Rep. Van Drew. 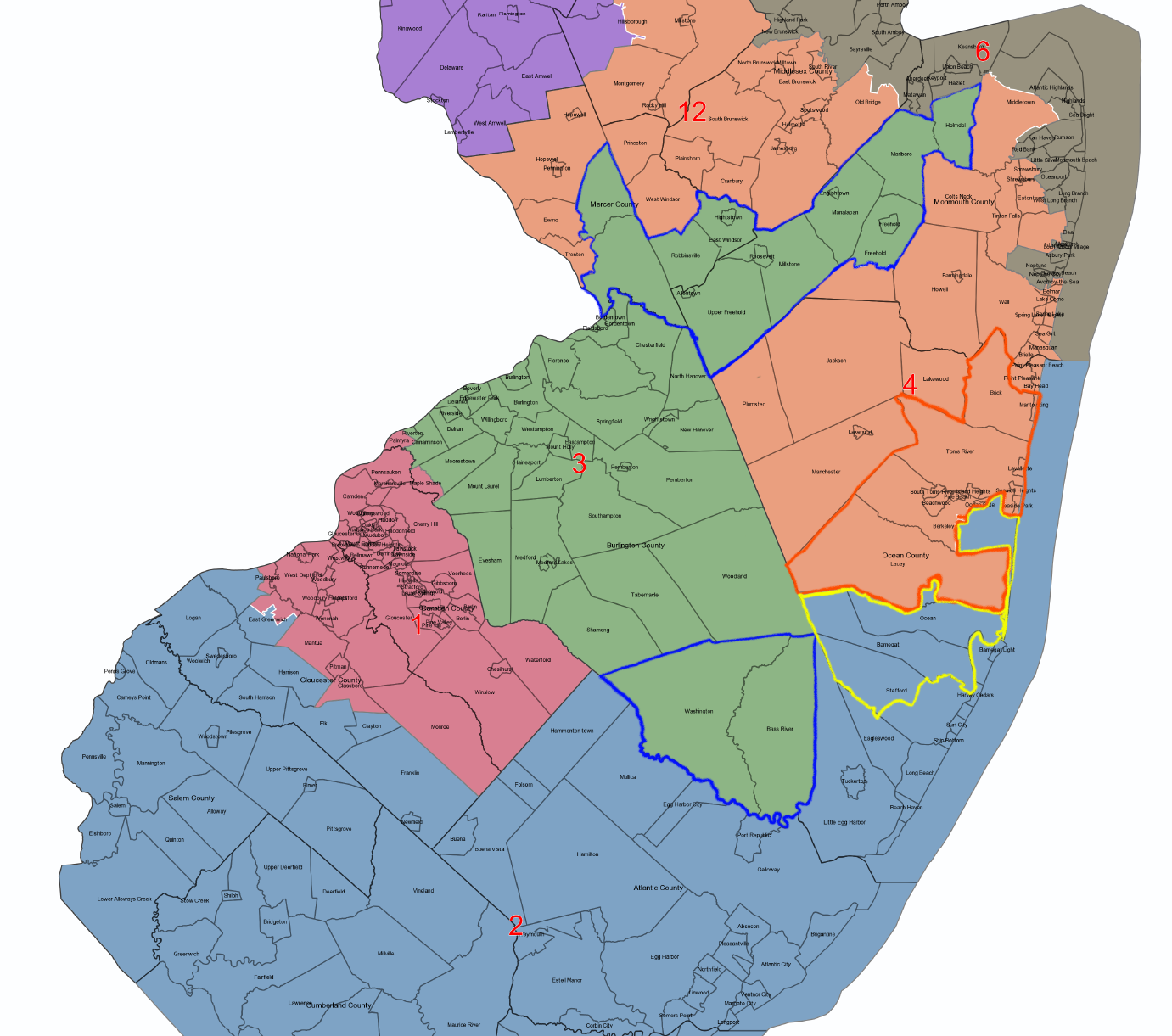